Beating Ice Hockey patch score (beat the computer) was very easy, did it on my second try. Again I am really surprised how easy it is to get these patches, I am not bragging, I know I am not a god at these games, still I pass everyone of them, many times easily. 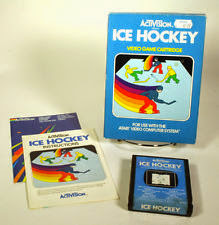 This game is a good example of the evolution between Pong and EA NHL games. You control sprites that actually look like real hockey players, and you have some control on the ball. I write some because I am not 100% certain that I was doing what I intended, but since I got better and better at "controlling" the puck, I assume it is just matter of time before someone get full control on the ice. 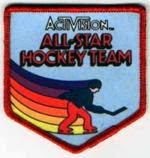 Really fun game, nicely done, but I don't think there is much replay value in a single player mode, seems way to easy.


Next game on my list was a harder one, I spent a few evenings tying to beat it, most of the time it would hurt my hand from cramping due to stress, pure Atari fun. This game is OInk!, and it is not a very good one. I feel that while the first screen is very colorfull and could make your think the game will be brilliant, you actually see everything on the first screen. Nothing else happens, the wolf just moves faster. and you get tired. To get the patch you must achieve 25000 points, which is not too hard after some time, but it took me a really long time to achieve the score. Now I feel that I can do it anytime, but I won't try because the game is super boring.

And I tried Space Shuttle, that game is incredible. Ingenious to use the color, level commands on the 2600 to control the space shuttle, makes it very realistic, but it is a hard game, I am not ready to  compete for the patch yet.

River Raid, a classic for my patch #11

I was waiting to play this one, but I had forgotten how painful it was for my hands. 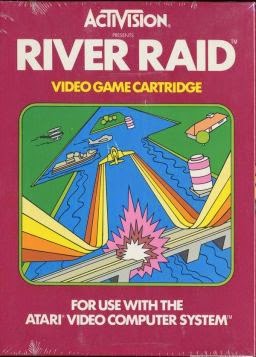 I must be so stressed piloting that airplane that my hands get cramps and there is no way for me to make it more comfortable, perhaps some other joystick. I did manage to get to the 15 000 points necessary to get the patch, but even tough I like it I won't replay that game, it hurts too much. Once again, thinking that this is the same machine that delivered Combat at launch, what a journey it has been for programmers. Speaking of this, everyone should read Racing the Beam that I mentioned already.
I feel that there is much more for me to learn about this game, I rarely used the speed to avoid objects for example, and definitely did not use the gas and weapons to their full potential. Beating the patch score was not too hard (15 minutes?), so I did not have to learn how to optimize my game. And in the end while I recognize why this is a classic and a must have, I don't love this game, just because it hurts my hands so bad, I don't enjoy playing it,
Now the exciting part of the evening is that I am going to play Space Shuttle, and aim for the patch score, so I must follow the mission plan.