Step 2 of my road to the patchiest denim jacket is complete, I broke the 6 seconds barrier at Dragster.  Now this is one the of the weirdest game ever, most of my attempts lasted less than a second until my engine blow up, very annoying for a 9 y old (maybe), who spent $49.99 on a brand new game.
It took me 30 minutes overall, and I shaved the last tens of seconds by reading ToddRogers' post on AtariAge. After playing I feel super nervous, like when I was playing these repetitive Game & Watch games, or like a tic prone guy high on Jolt Soda.

Such a weird game, were you have to press the fire button, then go left 7/8 times, not even in rhythm. So 5.94 is my one time best, I tried to break this time but was never able to beat 6.01 after that. It was my one time, but it is sufficient, I want my patch. 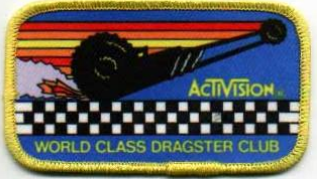