What do I do when you see this an ad like this on Craigslist ? Well, I email immediately and hope for the best. The Apple II was introduced in June 1976, so 1978 is still pretty early and has a chance to be an original II, not a IIplus or a IIe. 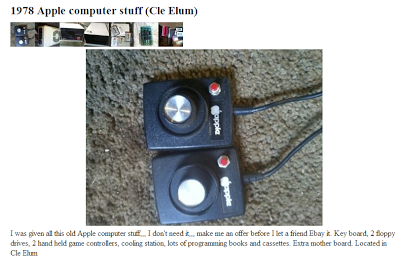 I got in touch with the vendor in a few minutes, he sent me more pics, showing an immaculate Apple II cover, now I was sure it was a real II. Phone call, made an offer high enough so he would accept, low enough to not break "my computer museum in my garage budget" then I drove to meet the guy hoping that now one else would call offering many hundreds of dollars for the machine.
Excitement when I got it, touch it, then drove back home to see what treasures was in there.
It is an actual II from the second week of 1979, it was somehow upgraded to the Applesoft ROM and the autostart ROM.It could have been more vanilla, but I am happy as it is.
It looks very nice, and works perfectly. It also came with some docs, various cards and software that I resold for more than what I paid for, to replenish the "my computer museum in my garage budget". I also got my first pair (2 actually) of original Apple controllers, very cool.

A few pictures below.