Since getting my Apple //c in June 1984, I have been a huge fan of this machines, and I regularly browse Craigslist for machines to rescue. I now have 6 machines of various kinds in my garage, maybe it is time to admit that I have an issue.
Over the last 5 years, I managed to locally find a couple of original Apple IIs, great machines, but both were upgraded to Applesoft roms. Back in 1979, I would have done the same, upgrade to a newer firmware, get new features. I do this with my phone, my car, whatever can be upgraded.  But 30 years later I am trying to get things in their original state.
This means re-installing the original Integer roms. For many hardware fanatics, this is fairly easy, but I am not one of them :)  I had both machines open on my workbench swapping roms right and left, but could not get them to work, various errors, no boot. Removing chips from the board with a screwdriver, installing new ones, testing, back to step 1.

Browsing the Apple II Enthusiasts group on Facebook, I got in touch with John who lives close by. He agreed to help me, so I went to see him with my machines, and a bunch of roms to try out. This ended up being a great afternoon, I met a great guy, so knowledgeable of both hardware and software.

The machine would boot to a garbage screen, but never complete the process. John used his own board that checks every important chip for i/o, voltage.


After checking every chip (replacing 2), the machine is still not booting, time to dig deeper. John opened Understanding the Apple II. This book is a collector item, I had one at some point.  It was nice to see the actual value of the book at work, it is not only an expensive collector item, it is also a very useful book.

Wile John was deep into following flow diagrams, I browsed his amazing colleciton. If I have a problem with 5/6 Apple IIs in my garage, he has 20, at least.... 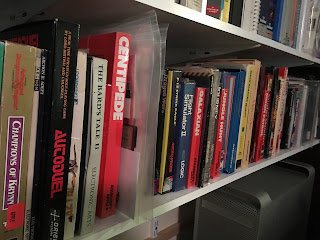 Finally the error was diagnosed, My screwdriver skills cut traces on the board. Not surprising I admit. 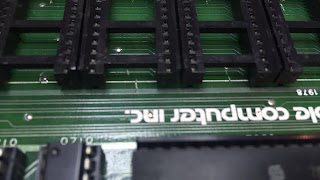 This means it is getting better, I learned. And it is finally booting. 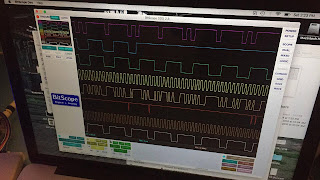 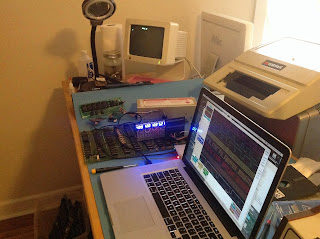 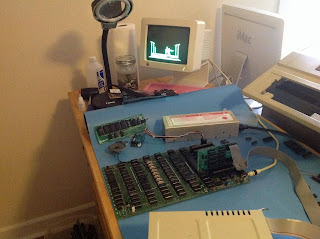 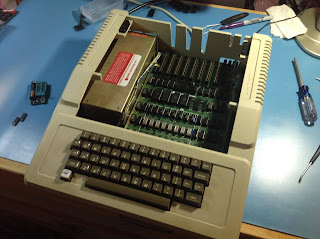